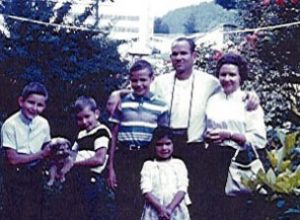 Henry and Dorothy with their sons Henry III, Edward and Steve soon after their arrival in Quito

When Henry and Dorothy Davis arrived in Quito, Ecuador in 1966, with their three sons, Henry III, Edward, and Steve (ages 12, 10, and 9), they left their home intending to serve as Foursquare missionaries. Henry came to serve as overseer of the churches in the mountain region of the country, and in the first year they were blessed to see the number of the churches grow, and a small Bible institute of 12 people open in Quito.

One day, an older gentleman came to the Davis’ home looking for a mission group that would be willing to take over his ministry in the maximum security prison in Quito. So one Sunday morning, Henry and a group of people from their main Quito church (there were 5 churches in Quito at that time) went to visit the prison. As the group ministered to the inmates, Henry began looking around. He ran into the director of the prison, who normally was not there on Sunday. In the course of their conversation, the prison director said, “You evangelicals are all alike. You want to preach to us, but no one wants to help us…”

As Henry toured the prison, he was amazed to see how filthy the prison conditions were and the stench that accompanied them. While walking around, he found 54 children living in the prison with their parents. The kids were allowed to sleep on the cold concrete floors beneath their parent’s dirty 6′ x 9′ cells during the night, and in the daytime they would beg or steal food in the market places. (In Ecuador, when a man or woman is imprisoned, often the spouse will abandon the children and remarry, leaving the children with no one to care for them.)

That night, Henry preached in one of their barrio churches in Quito, and as he was leaving, he found two boys living in the crawl space underneath the foundation of the church. The boys were using newspapers for blankets and had only garbage to eat. It was as if the Lord was speaking to him and said, “You just preached a wonderful sermon on how I meet all of your needs; tell me, how do I meet the needs of these two boys?” As Henry went home that night, he prayed about what he had seen. He and his wife, Dorothy, decided they had to do something. With the Lord’s help, they felt led to start a home for these children.

The following week, they found an old, run-down shack to rent for fifteen dollars a month, and the owner agreed to split the rent in half if they would fix the place up. There was no money set aside, so Henry repaired the roof with some used tiles and made beds out of plywood. Thus began the process of taking 36 children out of the prison. The rest of the children were not legally permitted to leave. They cooked over open fires for a year, and would put the children in their beds on Saturday while they washed and mended their clothes for another week. Only one of the 36 children had shoes. It was a “low budget operation,” as Henry called it, but at least the children had hot meals and warm blankets. About the time they got the property fixed up, the owner evicted them, claiming, “The children are destroying my property.” In reality, after fixing the place up, the owner could now charge more rent for the repaired home.

In time, the president’s wife, Corina de Velasco Ibarra, became aware of the ministry and a wonderful relationship developed. The President and his wife gave Henry title deed to 50 acres of land in a beautiful valley on the outskirts of Quito to establish a place for these children to live. So began the Happiness Foundation, or as it is known in Ecuador, the Henry Davis Foundation.

This history is truly amazing, because it is clear beyond a shadow of a doubt that God has always provided for every need. All honor and glory be to our God and Heavenly Father, who in His love and mercy had a beautiful plan laid out for their lives.

Since the beginning, over 2,000 children have been raised in abundant care.  Presently, there are approximately 90 children living in our homes on the property. Each home has a housemother or houseparents overseeing approximately 10 children. The children live on the campus until they complete their high school education. Once they graduate (if they qualify with grades and conduct), they are given the choice to continue their education at a university or trade school. Graduates consist of pastors, doctors, lawyers, school teachers, and several other professions, many of whom are continuing to serve Jesus Christ throughout Ecuador and the world.

The first family from prison in 1967 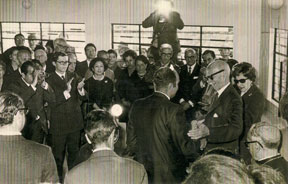 The medal of honor presented to Henry in 1970

Corina de Velasco, wife of the Ecuadorian President, signing the title deed to 50 acres of land on which the Foundation is now built 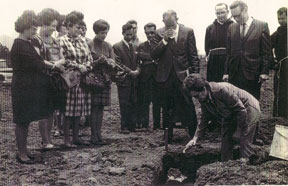